In addition to a rebranding strategy that included revamping the iconic Starbucks logo just over one year ago, the company is also planning a multimillion dollar overhaul of its European stores in an effort to boost sales in the region. Although the franchise has been wildly successful in the U.S. and performs well in Asia, European sales of Starbucks continue to lag despite the company’s decade-long presence there.

The French market has been perhaps the most challenging of all, stumping Starbucks with a number of economic, socio-political and cultural factors. However, Starbucks is determined to succeed in the region, and has invested millions in order to redesign the 63 stores currently operating in France. The newly redesigned stores will have plush furniture where customers can relax with friends over coffee, and will offer menu items to suit local palates. Stores located in high profile areas will be ornately decorated with chandeliers and gilt-leafed ceilings.  The photo below shows the interior of the Starbucks located on the impossibly chic Boulevard des Capucines in Paris. 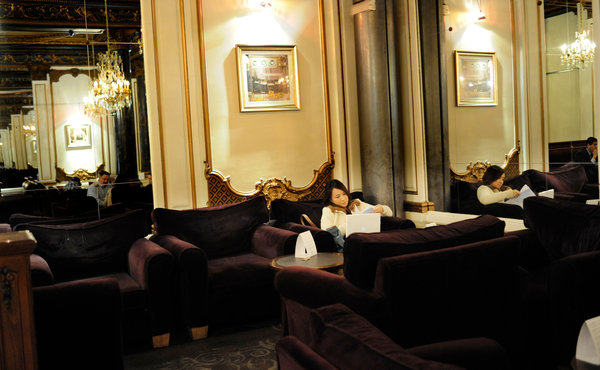 Economically, the French pocketbook has become even more price sensitive due to the global recession and European debt crisis. As well, high rent and labor impact operating costs to such an extent as to make France one of the most expensive operating regions for Starbucks.

However, perhaps most confounding for the company has been how to cater to French preferences while still remaining true to the Starbucks brand. As the epicenter of coffeehouse culture, the French tend to prefer a ‘sit, sip and socialize’ atmosphere and often reject the notion of ‘joe on the go’. These cultural habits have become ingrained into the French way of life making it extremely difficult for Starbucks to make an impression on the sophisticated French market.

Still, despite the French consumers’ preference for neighborhood coffeehouses, some French consumers are willing to give in to the novelty of the company seeing the Starbucks brand as an ambassador of American pop culture.

However, Starbucks will not be content with mediocre success in France. In order for them to achieve the notoriety that has made them an instantly recognizable brand in America, they will have to be careful to satisfy regional tastes, respect cultural coffee-drinking habits, and still deliver the classic Starbucks experience.