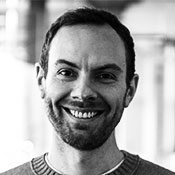 Andrew is the co-founder and managing director of Flipbook Studio, a multidisciplinary production company based in Manchester city. Andrew began his career in VFX and animation as a producer at Bafta-winning studio Redvision, before joining RealtimeUK and then, finally, co-founding Flipbook in 2010. As managing director and executive producer, Andrew oversees and maintains the studio’s high-quality output, ensuring productions are innovative, thought-provoking, and engaging. Under his supervision, the studio has worked on a broad range of campaigns including VFX for Star Wars: Origins, Ninja Theory’s launch campaign for Bleeding Edge, and VFX for the BBC and Netflix series, The Worst Witch.