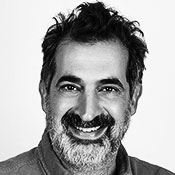 George Eid founded the branding and digital product company Area17 in New York in 2003, adding a Paris studio in 2006. Today, the company works for brands that include Nike, Google, and the New York Times. Alongside his brand work, George has founded several digital products through the company’s incubator, such as Subfolio, Slash, Krrb, and Twill. Having begun his career in the theatre, George developed a passion for code alongside his other love, food, founding a restaurant with his brother. George lives in Paris with his wife and daughter.