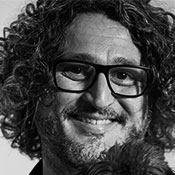 Luis Reyes develops work at the intersection of media and technology, shattering conventional notions of content and form. As an Executive Producer and Partner at LA-Based creative media company Butcher Bird Studios, he has expanded the definitions of interactive media, branded content, and audience engagement, spearheading work for brands such as Twitch, Netflix, Samsung, Mazda, Lenovo, Intel, and TYLT, among many others. Luis has also been a contributor to publications such as the LA Weekly, Los Angeles Times, and Flaunt Magazine.