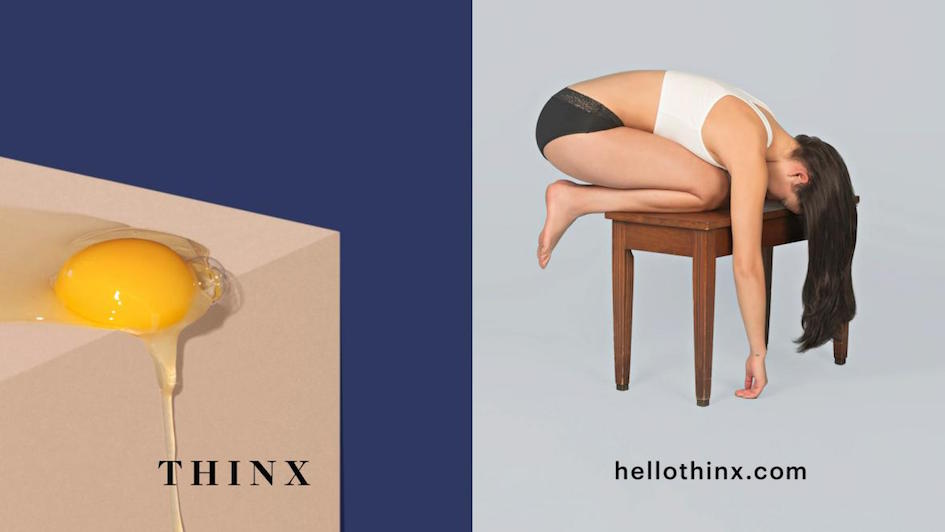 If any of you have had the chance to ride New York’s subway recently, then you’ve most likely been confronted by colorful, artful images of food alluding to periods and cheeky copy (not to mention cheeky women). And while that may be uncomfortable for certain people, it never comes across as crass. In fact, everything is tasteful, but colloquial — and there’s no shame in that.

That’s where the empowerment from THINX, the e-commerce brand that promises clean and comfortable underwear for women during their menstrual cycle, stems. The brand recently gained notoriety for the MTA’s initial ban of their ads, to which THINX responded with a fight against the double-standard of equally “lewd” ads of say breast augmentation and a call to open the conversation to an experience half of the population has on a monthly basis.

This got us interested. What else has Thinx been doing in terms of social responsibility? How did they, as a startup, navigate (while simultaneously break down) this taboo space? We had the chance to speak with Miki Agrawal, Co-Founder & CEO of THINX, on her motives for starting the brand, along with their approaches to marketing and brand positioning.

Branding Magazine: What were the factors that contributed the most to launching Thinx?

Miki Agrawal: My twin sister Radha and I were at my family barbecue defending our 3-legged race championship title when, in the middle of the race, Radha started her period and we had to rush to the bathroom still tied together to get to the bathroom to change out her bathing suit bottoms. As she was washing out her bathing suit bottoms, we had the “Eureka!” moment and said, “Wait-a-minute! What if we could create a pair of underwear that never leaked, never stained, and that actually worked for every girl during her period no matter the situation?”

I did some digging and realized that in the entire 20th century, there had only been 3 innovations in the $15 billion feminine hygiene sector (in 1931 there was the invention of the tampon — by a man; in 1969, there was the addition of the adhesive strip to a pad to prevent it from moving around; and in the 1980s there was the mainstream popularization of menstrual cups). Why have there only been 3 innovations in 100 years, in a category that women are required to be in for the better part of our lives? Because it’s taboo. And taboo happens to mean menstruation in its Polynesian root word tapua. NOT kidding.

So we invented a much-needed pair of underwear that looks like a normal pair of cute undies, but has hidden technology built into it that finally helps women period better. And they really work!

In addition to solving our own period problems, we also realized the MASSIVE menstrual issue that girls in the developing world are still experiencing today. Right now, over 100 million girls are still missing a week of school because of their periods and are using things like old rags, leaves, mud, and mattress bits to try and manage their periods. And none of it works, so they end up staying at home. What we’re doing is for every pair of THINX undies sold, we fund a pack of reusable menstrual pads to girls in Uganda, so that they can stay in school.

BM: What was the process like for determining the values and positioning of the Thinx brand?

MA: Because of the genesis of the company, we knew that the massive lack of innovation in the space (and of course, the lack of resources altogether in the developing world) was a result of the shame and taboo surrounding menstruation. So, our mission was always to break that taboo. We later workshopped our brand positioning and characteristics as a team to figure out how we were going to get that message out, and we decided that our priority was to always be (1) empowering, (2) innovative, and (3) trustworthy. We also developed a brand character named Scarlett, who helps us make important branding and messaging decisions. These all now work as our compasses on a day-to-day basis. 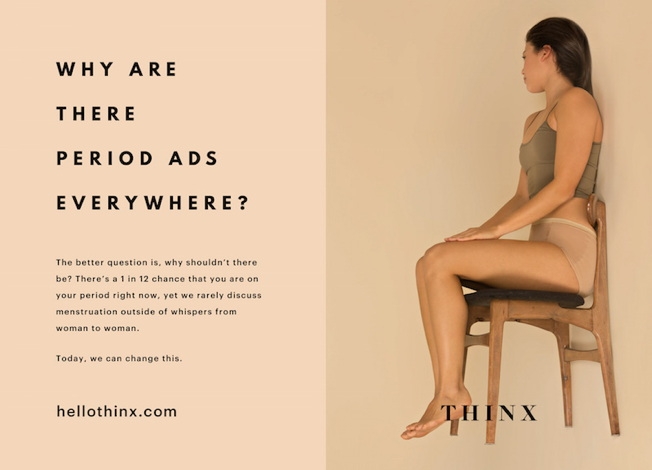 BM: How did you pitch this supposedly taboo product to investors (who unfortunately are mostly male)?

MA: Wired put out an article called, “Hey Silicon Valley, Let’s Talk About Periods”. They mentioned that, according to a Fortune analysis, only 4.2% of senior partners at venture capital firms are women. This is very real, and I told them how, when we were first raising money, I made a friend of mine (who is a guy) wear a pad. I said, “Put it on, and then sit down and stand up and then tell me how you feel.” He was just like, “This is ridiculous,” and totally got it right away that our current solutions needed to change. He ended up becoming one of our angel investors.

“I did some digging and realized that in the entire 20th century, there had only been 3 innovations in the $15 billion feminine hygiene sector”

BM: How did your approach to investors transition into your marketing efforts?

MA: With women, it’s much easier; they know exactly what the period experience is, and we can just hand them the underwear and let them try it. So, in our marketing, we also try to address the very relatable and visceral things that we all experience while we’re on our periods.

BM: What are some of the marketing actions that have been most effective for Thinx?

MA: We’re a content-driven company, and we believe in doing meaningful, educational, and entertaining work that gets people excited. This leads to just general brand love, and also word-of-mouth, and of course, press too. Some really awesome efforts that have gone super far are our short documentary, The Week, and our Transgender Awareness piece, People with Periods, and even smaller things like our weekly newsletter, This Week in Feminism (if you don’t get it, sign up on our site or check out our blog!).

And, even our paid activities like the subway campaign end up really paying off because we’re making bold and meaningful statements. And this isn’t really an “action” per se, but generally, I think our authentic approach and approachable tone has been extremely effective. We get that THINX sounds weird, and that it’s uncomfortable for a lot of people, so we can’t take ourselves too seriously, and we have to find the humour in it! People really like this about us. 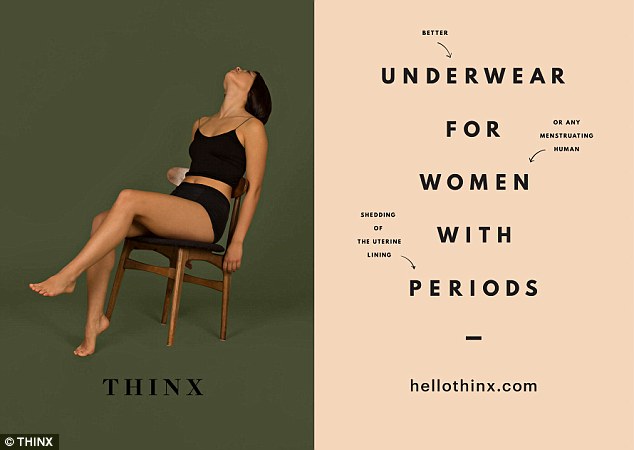 BM: THINX is notorious for its recent ads on New York subways and in major stations like Grand Central and Broadway – Lafayette. What made you decide to take this approach? Can you talk a bit about the modern, simplistic, and unapologetic copy?

MA: I have one rule for my creative team when it comes to visuals; whether it’s a postcard or a subway ad, it has to be “fridgeworthy” — like you’d take it home and stick it on your fridge. We also knew that whatever we did had to be “Google-able” — intriguing enough to get them to Google it as soon as they were over ground and had cell phone service. With that, the team thought of using food to represent periods; for example, the egg was inspired by my coming in every month and saying, “I literally just felt my egg dropped.” They really wanted to show the period itself, through the food, and then also show models looking how they might actually feel when they’re on their periods.

We knew that there would be really beautiful imagery there, and that it could be juxtaposed with really surprising copy … surprising in that the everyday subway rider doesn’t expect to see “PERIODS” posted loud and proud anywhere in public. When it comes to copy, our rule is just that it at least makes you smirk. So, when we wrote our copy for the actual subway cars, we used vernacular that’s familiar to our Millennial market — just as the entire period experience is familiar to them.

RELATED: Marketing in a World Where the Most Popular Word Is an Image

BM: There are other disruptors, like Lunapads and Dear Kate, that haven’t reached the recognition that THINX has. What do you believe to be THINX’s major distinguisher as a brand?

MA: I think that firstly, we’re a brand that simply feels like something people can rally around and get behind. We’re not apologetic about periods; we’re unafraid to be loud about being a straight-up, period-proof underwear company; and our community knows that we care about women’s health here and in the developing world, along with feminism at large. There’s also always a bit of a compromise, where a product either looks super fashionable or functions exceptionally, and ours does both, which we’re very proud of.

BM: THINX (as well as your other brands like Icon and Tushy) partners with an organization or gives to a greater cause, building on the TOMS Shoes model. Why did you decide to use this approach?

MA: Our givebacks are always empowerment models, where they are sustainable solutions that will last over time by educating and employing local communities. Our partners right now are AFRIpads, The Fistula Foundation, and Samagra House — but we are also at a stage with THINX where we are starting our own THINX Foundation so we can really have control over where our contributions are going and be truly in touch with those who benefit from them.

“We’re a content-driven company, and we believe in doing meaningful, educational, and entertaining work that gets people excited.”

BM: You’ve mastered the art of the taboo space, but what draws you to it? Do you have advice for entrepreneurs and brands entering that space?

MA: If you look at my businesses, the two constants are:  I get to address real taboos and give back in areas that I care about. We get to break these taboos with education, humor, and inspiration. We get to educate people on what is going on around the world, even if they can’t see it first hand — whether it be menstrual taboos that cause girls to drop out of school, the fistula crisis that is ruining women’s lives (and can be fixed), or the sanitation crisis that affects 40% of the world. I feel good that we have helped 45,000+ girls go back to school with THINX’s partnership with AFRIpads to date and look forward to having even more impact in the years to come.

BM: How successful have you been thus far on a global scale? Were there any surprises?

MA: We are an e-commerce brand, so we’re sold exclusively online — we have actually shipped orders to every single continent already, including Antarctica 🙂