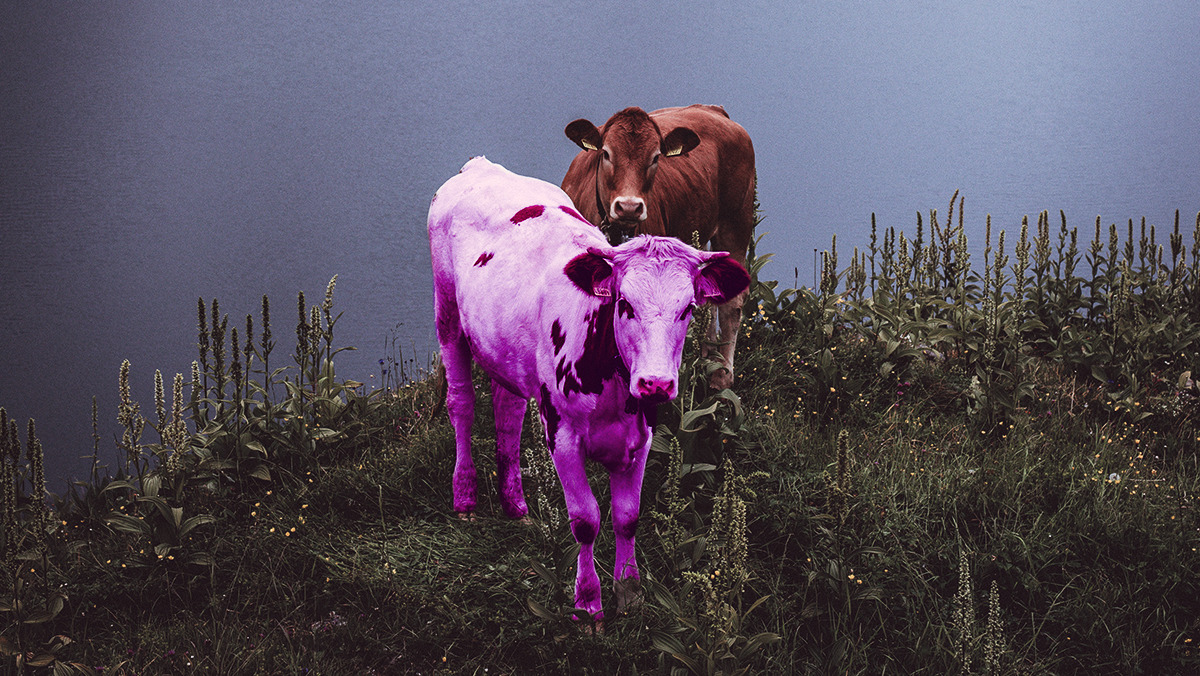 Do you remember Seth Godin’s “purple cow”? This is a principle in marketing, according to which you have to be completely different in order for consumers to notice you. Just like the cows you see from the train window. Even if they are interesting to you at first, the black and white cows soon get you tired and you stop paying attention to them. But…if a purple cow suddenly appears, that’s a different thing, and it WILL grab your attention.

The entire advertising industry had relied on the purple cow for too long. For a long time, agencies competed over who would come up with a more noticeable and different advertisement. From David Ogilvy with “The eye-patch man in Hathaway shirt” to the Cadbury gorilla – generations of admen have created stories that grab your attention and turn you from a viewer into a buyer. For decades, marketing has worked this way – the one with more visible advertising sells more. The story of successful marketing was actually an evolution of advertising’s purple cow. The cow was getting noisier, wittier, and businesses were using it more and more. Until this cow grew old…and died.

The “who advertises louder sells more” system has stopped working.

SEE ALSO:What Is Wrong with Advertising in Three Promoted Tweets

For example, let’s look at a hypothetical marketing plan. In it, after the analysis of the market, competitors, psychographic, and consumer culture, we come to the essence – sales planned for the year.

Imagine retailer X, which plans to sell Adidas sneakers in March, Nike sneakers in May, and Puma sneakers in September. And against his Excel spreadsheet, he expects an advertising agency to offer an “advertising purple cow”, which will distinguish his offers enough so people notice and buy them.

This is how a marketing manager tries to drive sales. He has been doing this for years.

And why doesn’t it work anymore?

Because the marketing manager of the sports retailer X has forgotten that the same shoes (Adidas, Nike, and Puma) are also offered by retailers W, Y, and Z, maybe even at better prices. Not to mention the huge online retailer A, which has over 80,000 results in the “sneakers” category alone. And each of these sellers draws up similar marketing plans and wants distinctive advertising. As a result, advertising purple cows become too many and they are no longer interesting. They become irritating and annoying.

In Europe, the volume of TV advertising is 20% of airtime. That’s 4.8 hours of TV ads every day. In the USA, the percentage is even higher – ads take up a third of the primetime. How much more annoying can ads be?

Advertising has become unwanted spam – and that’s only a part of the change.

The big difference comes from consumers. To impress today’s consumers, it’s not enough to have a witty ad, because, behind the mask of wit, your ad says the same thing as everyone else – “I’m selling the best. Buy now!” Today, people don’t like to be told what to do, so they’ve stopped trusting ads. They trust in the fast internet and social media comments. They trust in Google’s organic results. They trust a friend’s recommendations and their own experience. Today, people want to see for themselves – to try, to make their own conclusions. That’s how people choose what to buy today, not with ads.

If anyone still imagines that armed with a good advertising campaign will conquer the market, let’s look at one of the symbols of the advertising industry: Super Bowl.

In 2016, Hyundai made significant investments in three Super Bowl ads, promoting the Elantra and Genesis models. The ads are great purple cows and generate over 50 million YouTube views. All three are in the top 10 of the USA Today Ad Meter and are among the most-watched Super Bowl commercials of all time.

Despite the advertising success, Hyundai’s sales in the US increased by only 0.83% during the year, with the growth not even coming from the advertised Elantra and Genesis but from the Tucson SUV.

These are huge advertising investments without results and Hyundai is not the only case. The findings of a study by AdAge and research firm Communicus are: “80% of Super Bowl ads don’t help sales.”

Let us now see the opposite example. In 2015, Volvo successfully promoted the new XC60 model at Super Bowl, without even having a Super Bowl ad. How? Instead of spending millions on media, Volvo decided to donate a car. To compete for the prize, all you had to do was tweet #VolvoContest every time you saw a Super Bowl car ad – on any car brand. With this clever move, Volvo turned the high-paid ads of its competitors into Volvo ads, because it made viewers, while watching the spots of Mercedes, Toyota, Lexus, Nissan, Kia, and Fiat…to think of Volvo. Most importantly, instead of just another ad, Volvo has done something that really engaged consumers. With over 114,000 mentions on Twitter, #VolvoContest has become a cultural trend and scored $200 million USD in earned media impressions. Sales results: Volvo reached a 26% sales increase for their XC60 model in the month following the Super Bowl.

The moral of the story: If you’re pursuing business success and sales, you better not rely only on good old-fashioned advertising. Look, if you have an idea for something that will create a new experience for consumers and will engage them actively, that’s another matter.

This is the direction we, the marketing and advertising professionals, must follow in order to do our job better. The advertising purple cow is dead. New and working models of promotion are already making their way on the market.

The new purple cow is not to be a purple cow at all. No matter how excited you are about your poster or the video-spot for your new campaign, know that no one cares about them because the consumer is bombarded with hundreds of such ads every day. If your brand wants to grab people’s attention, you don’t need fictional advertising stories and fictional advertising characters, but something like Volvo’s marketing stunt – something with a place in the real-life of real people that really engages them. Today, the key to market enforcement is not to talk, but to give people a reason to talk about you.

See the Starbucks cup for an example. The cup is certainly not an advertisement, it is a consumable – without having cups, they cannot sell their coffee. Just consumables, worth 3 cents. Yet, with the simple idea of writing your name on the cup (which doesn’t even cost them anything), Starbucks makes it part of their unique experience. The cup with your name on it becomes a tangible bearer of the brand’s promise: we don’t make coffee, we create community. Think about it – what is the best way to join a community of people? To go to them and tell them your name, isn’t it? 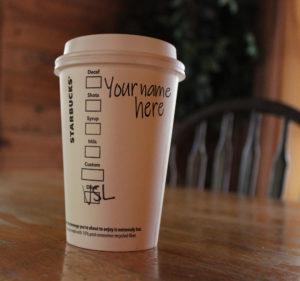 There are 37,274 coffeehouse stores in the USA. In Seattle alone, where Starbucks opened its first store in 1971, there are 843 coffee shops, 173 of which are chains. When you compete in such a busy industry, your only chance of success is to stand out from everyone else as a culture and as a consumer experience.

The cup is just the most obvious example. Starbucks builds the Starbucks experience in many ways – in partnership with Apple iTunes and Spotify, they allowed customers anywhere to download and listen to their favorite Starbucks music, and in partnership with Mondelez and PepsiCo, they created new touchpoints outside of their own coffee shops. Starbucks-inspired, experimental coffee-houses are opening, serving wine and beer, and offering live music and poetry readings.

This is modern marketing – you don’t bother with paid ads that tell stories about your brand, but you give people the opportunity to experience your brand. If you do it right, people will eventually tell your brand stories themselves.

Think of modern communication as the availability of the brand at all relevant touch-points. We can call it ‘brand distribution’. Does every point where the brand engages people expresses what we want people to think and feel about us? When people see our product in the store, would they feel as the brand promises them? When one tells another person about our product, would one tell the same we would say in our ad? Modern communication is a promise in which the brand explicitly states how it brings a change in people’s daily lives. It’s a promise and distribution of the brand at all touchpoints, available to consumers. 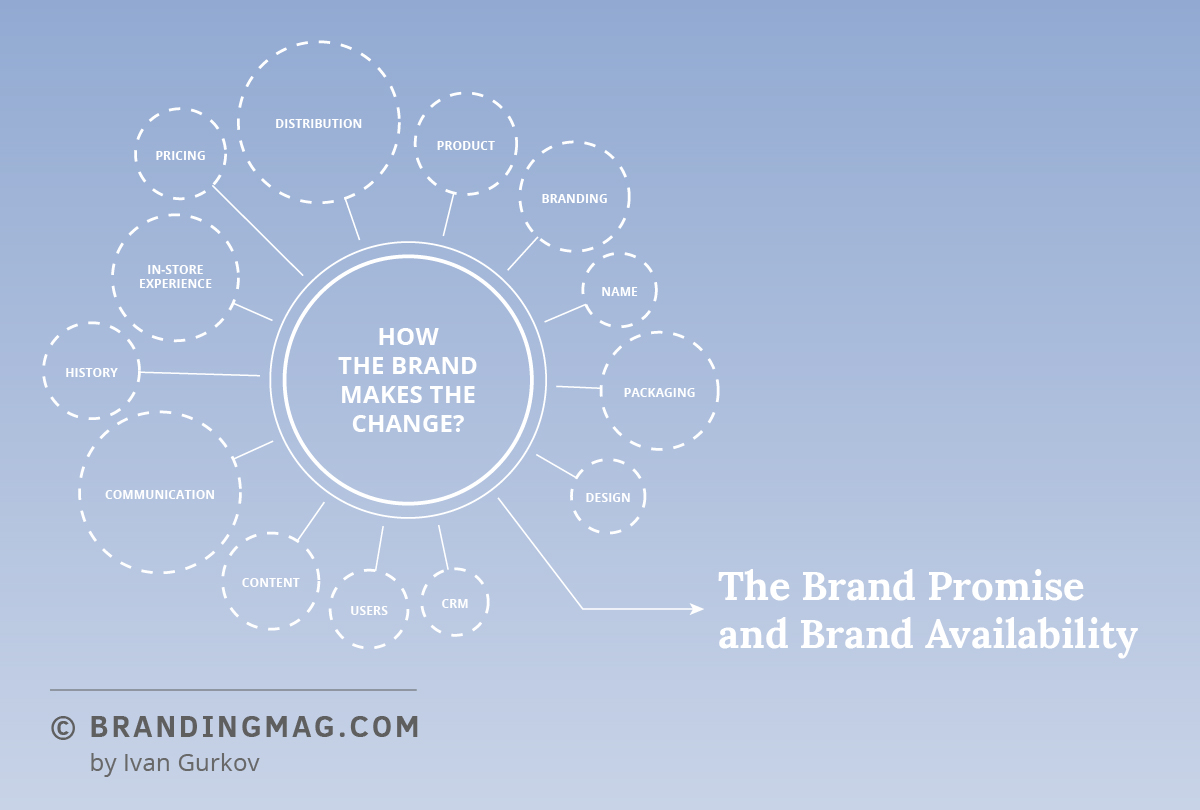 The goal is no longer to grab attention to tell a laudatory story. The goal is to create an experience. In this way, people can see our story for themselves and draw their own conclusions. Thus, they will trust in our story and will tell it to others. People are no longer just buyers, they are gaining much more importance as advocates for our brand.

In a recent interview with Brandingmag, Professor Philip Kotler defined the biggest marketing mistake today: “Many companies still practice marketing as a ‘push’ discipline.” Too much ‘push’. The advertising cow only knows how to push – with horns ahead. Maybe we should try a little pull? Maybe we should stop interrupting people with stories they don’t care about and try creating stories they want to participate in.

The goal is no longer to grab attention to tell a laudatory story. The goal is to create an experience.

The new model of promotion is not advertising purple cows in paid media, because today we are the media. We, the people. We are more connected than ever, we communicate constantly, we just don’t talk about brands and advertisements. We talk about the things in our lives, the things that surround us. And if brands just stop talking and find a way to take a tangible place in the world around us, maybe we’ll notice them, and maybe even start talking about them.