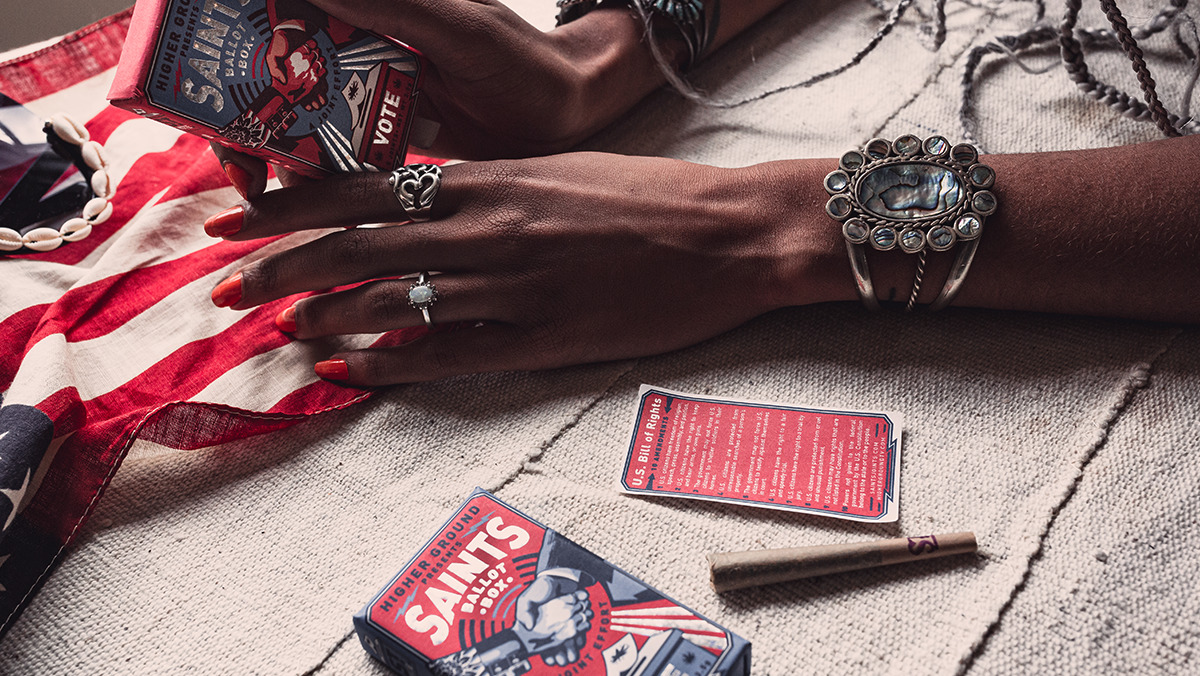 Taboo aside – cannabis is part of the world around us. While some try to ignore it, others strive to harness its many properties, even at the commercial level. Pretty unique brands have emerged in this industry in past years, even if cannabis is mostly banned around the world and probably holds a high position on the list of products that are difficult to market (mostly because of restrictions). But the “brand life” is certainly hard for them.

Nonetheless, 2019 saw the launch of Clio Cannabis Awards, which celebrates the creators at the forefront of cannabis marketing and communications. Brandingmag chose to interview one of the winners of the 2020 edition, to find out what it means to lead a renegade brand in a world of preconceptions.

Michael Stusser is an award-winning journalist and documentary filmmaker, and the host of Higher Ground, an irreverent media platform about cannabis culture. Higher Ground, along with Saints, recently won a Clio Award for their Ballot Box, a high-end package of cannabis pre-rolls that includes a QR code that registers voters, a mini version of the Bill of Rights, and non-partisan information about elections.

We sat down with Michael to talk about the serious matter of cannabis brands, in a not-so-serious way. Here’s what he has to say:

Brandingmag: A spin-off of our usual opening question – what does Cannabis represent to you?

Michael Stusser: Well, it’s a way of getting high! There’s no reason to shy away from that element – and cannabis is far safer than alcohol. At Higher Ground, we like to think about cannabis as “high-culture”. Sure, it’s a plant, and medicine for many, but – for us – it’s also a connector to all the great things associated with it: music, laughter, science, creativity, and yes, the munchies. Think about Bob Marley, Carl Sagan, Ilana Glazer, Shakespeare, Willie Nelson, Kareem Abdul-Jabbar, Maya Angelou, Hunter S. Thompson, and President Obama. That’s an amazing line-up!

Cannabis also represents an opportunity – to educate, explore, and make folks crack up along the way. It’s why we produce a wide variety of content. We talk to cops about legalization one day, and do a “Comedians in Cars Smoking Cannabis” parody the next. We’re also well aware of the decades of injustice involved in the War on Drugs – so we try and make sure we highlight how many individuals are still in prison for cannabis.

Bm: How about its brand? How is Cannabis perceived around the world and why?

MS: The rest of the world really doesn’t have the stigma America does about weed. (Thanks, Nancy Reagan!) I mean, the U.S. government currently categorizes marijuana the same way they do heroin and meth, so they’re a little out of touch. Until it’s legalized at the national level, we can’t do nearly as much research, testing, and development. Portugal legalized all drugs, twenty years ago. Israel is doing incredible scientific work harnessing the medicinal properties. Of course, Amsterdam and Spain have their stylish cafes. And don’t get me started on the fab Rastafarians in Jamaica! Having said that, some governments (China, North Korea) will sentence you to death if you get caught with a joint…so, there’s that.

Bm: What’s it like to manage a Cannabis brand? Is it more difficult than others?

MS: I’m having a blast hosting Higher Ground because it’s so challenging! Our slogan is: “Elevating the Dialogue on Cannabis Culture. (Kind of…)” – and the reason we state it that way is that trying to “manage” anything related to cannabis is like herding cats: ya have to maintain a sense of humor – and have lots of air fresheners handy. Given the illegality of cannabis in so many places, and the stigma around it, attaining our mission is a bit more difficult: Our Higher Ground Festival couldn’t even have plants. But that’s also a great opportunity – to use those awkward moments to explore the topic. How do we talk to our kids about cannabis? How can some people make money selling pot, and others are in prison for doing the same? And, instead of bringing a bottle of wine to a dinner party, is it cool to show up with a bouquet of Martha Stewart’s finest herb?

SEE ALSO:How to Create an Award-Winning Product for the Shelves

Bm: What are the toughest marketing and PR challenges for such an uncommon brand?

MS: The stereotypical language and images drive us a bit bonkers. We’ve banned all Cheech & Chong mentions, for example. And if we see stupid stoner behavior, we point it out. One of my favorite segments was calling out High Times for trying to set a World Record for the Biggest HotBox session. If you saw a bunch of kids trying to drink as much vodka as possible, you’d put them in jail. We are framing cannabis in a new way – elevating the dialogue. Yes, we cover what it means to be high, and the reasons we all seek an elevated state of mind, but we are also documenting and chronicling this incredible time in our history, advocating for the legalization of cannabis – along with civil rights, gay rights, and human rights.

Finally, in regard to our challenges related to language – we don’t want to get caught in the weeds regarding indicas, sativas, and terpenes. The idea is to be accessible at all times. We just shot a segment with some senior citizens who were experimenting with pot replacing pills for ailments like arthritis.

Bm: Would you consider the Cannabis industry to be highly regulated? Why so? 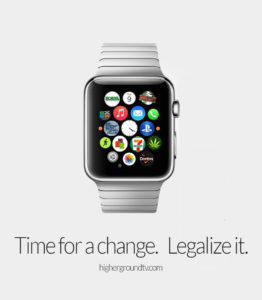 MS: Oh, it’s highly regulated, all right. We recently got banned from Instagram (after reaching over 200,000 followers) for a meme about legalization! So, yeah, I’d say it’s HIGHly regulated. Same arbitrary rules exist on Facebook and YouTube. In addition to cannabis being illegal in the majority of states, the rules for advertising and airing our segments are complicated. Thanks to outspoken filmmakers like Seth Rogen and Judd Apatow, and artists like Margo Price, Lady Gaga, Jay-Z, Chelsea Handler, and Jennifer Lawrence, things are moving in the right direction. Part of the reason celebs are coming around, of course, is because they’re now in the biz, hawking CBD and hemp products. (Patrick Stewart, Jim Belushi, Joe Montana, John Legend, Carlos Santana, Megan Rapinoe). We love it – as it gives us a better chance of booking Gwyneth Paltrow on a future show – hoping she doesn’t bring her egg. Regarding regulations, though, I really do think we’ll bust down the doors in due time: I mean, at one point, the networks refused to show Elvis below the waist. And today? I give you Miley Cyrus…

Bm: What do you think is more important for a Cannabis brand to have: a top brand design, a unique experience, or social good involvement?

MS: Can I choose all of the above? For Higher Ground, the projects need to be communal and uplifting. (Which, not surprisingly, is the kind of strain I like – chatty!) Our brand design and artistic execution are crucial to all our projects. Part of the reason we teamed up with Saints on our Higher Ground Ballot Box, was because they are an upscale company that shares our vision. They understand that cannabis brands – and consumers – want to do more than just get as high as possible. They want to participate in progressive action. They want organic products. They also want beautiful things. Together, we used the Ballot Box project as a platform to spark engagement, and register new voters. It also put folks in a damn good mood leading up to Election Day. 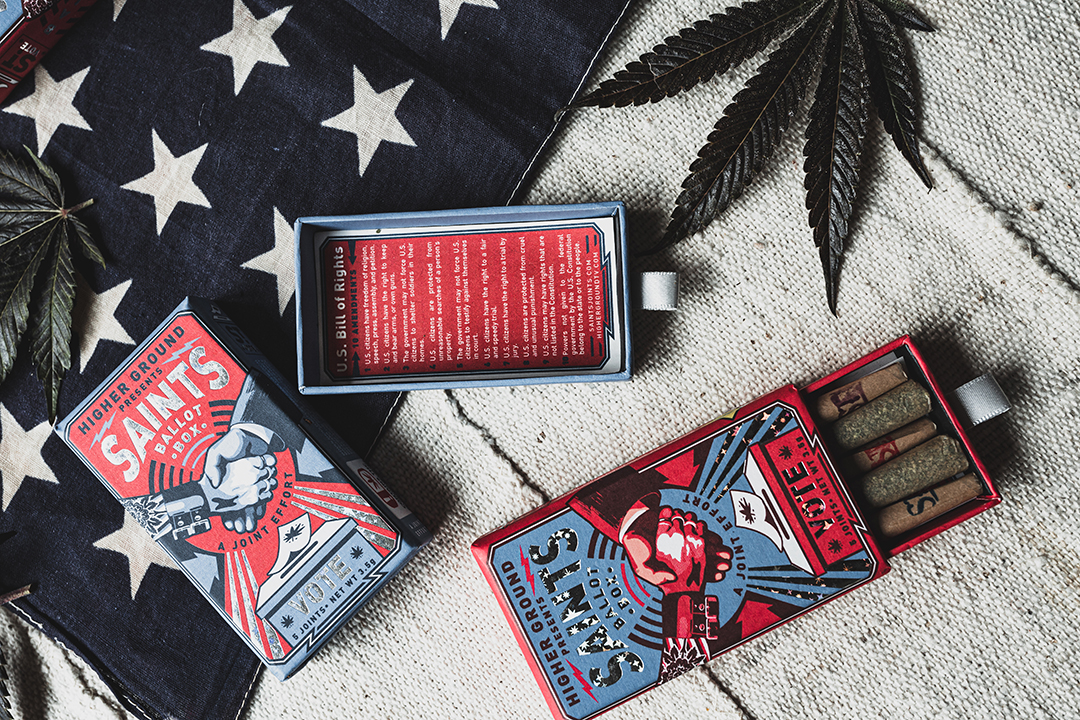 Bm: Yes, there are many challenges for a Cannabis brand, but what are the good parts unique to this particular industry?

MS: Cannabis is cool! Always has been. It’s something Bob Dylan, Morgan Freeman and Bill Gates all have in common. Maybe that’s what America can come together about in our divided times. Really, though, there is so much good about this new era of legalization – and we’re just at the beginning of the movement. It’s funny because even I am surprised by some of the positive stories I see in the news: With only five years of legal cannabis – now in 15 states (and medical use in 36 states), we have a ton of data – and it turns out weed is not a gateway: legal States haven’t seen any significant rise in marijuana use by adolescents; people in legal states are drinking less alcohol; having access to cannabis is associated with reduced opioid use and opioid-related overdose deaths; and there haven’t been increases in fatal motor-vehicle crashes or fatalities in the States that have legalized it. So we’re turning Reefer Madness…into Reefer Gladness! Wait until you see the new “This Is Your Brain on Drugs” ad we have cooking up.

Another really cool part of the cannabis industry is innovation. We just tried a “Keurig for Cannabis” machine. And, of course, boutique CBD cremes and artisanal THC sodas are the current trends – but cannabis is also helping veterans cope with PTSD. Industrial hemp is being used to build houses and power cars. That’s where it’s going. It’s fun. It’s modern. It’s the future.

Bm: What would be the ultimate partnership or association for a Cannabis brand? Which industry and/or brands, and why?

MS: Rihanna! She’s elegant, talented, and seems to have her hand in so many diverse projects – fashion, music, lingerie…and cannabis! (I have also asked her to marry me.) Ultimately, we want to partner with artists who are elevating the dialogue in their own way. I love seeing empowering collaborations, like the amazing work from the WNBA around the Black Lives Matter movement. Patagonia’s virtual film series supporting National Parks is perfectly on point.

Our dream projects would be Stoned Symphony Nights at the Met, an interactive exhibit at MoMA. Or Star Gazing-n-Ganja with Neil deGrasse Tyson. Tell me that wouldn’t be mind-blowing! Big picture – the vision for Higher Ground is to be a mainstream lifestyle platform – airing our content on the networks and sites that reach the masses: Imagine The Tonight Show meets Good Morning America…just with a giant bong on the desk…