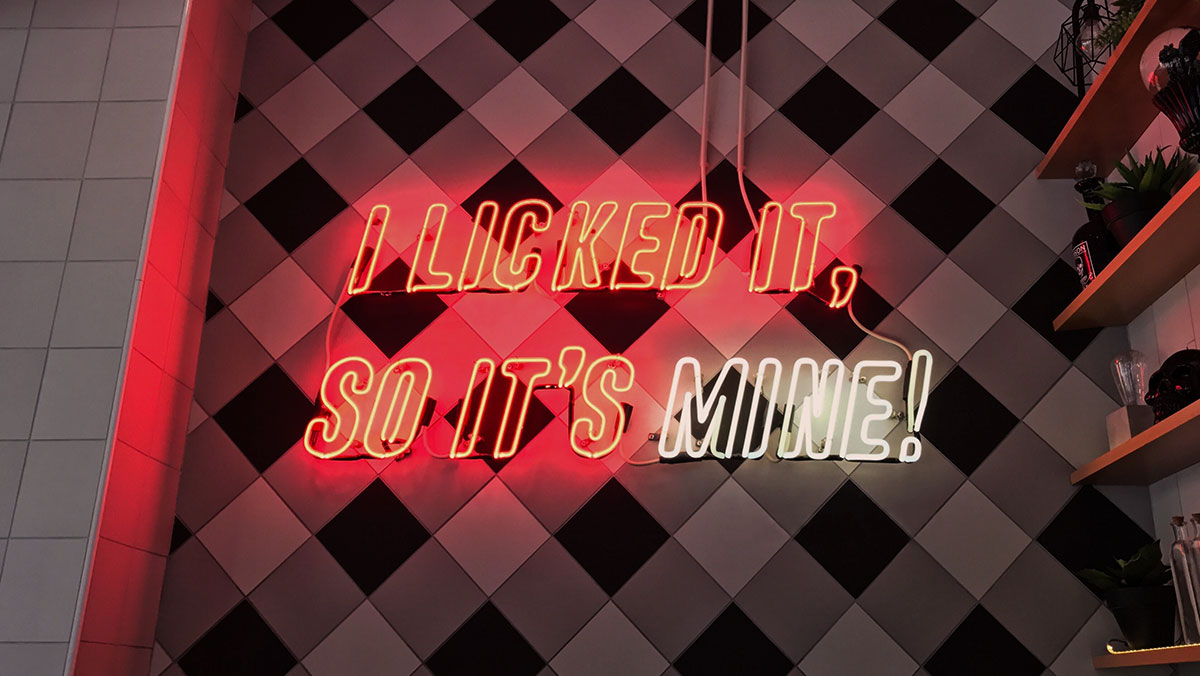 “Don’t try so hard to be different. Be yourself, always.”

It sounds like something posted on Instagram by one of your soppier friends. But, as advice for creating a brand tone of voice, it’s pretty sound.

Since we’re talking tone of voice, let’s get the Innocent name-check out of the way. Almost 25 years since the chirpy smoothie crowd kicked off a revolution in copywriting, you still get all sorts of companies saying they want to do what Innocent did.

Trouble is, mostly they don’t do what Innocent did. They just copy Innocent. And there’s a difference.

What Innocent did was to find a voice that beautifully crystallized the personality and ethos of their company. That’s what other brands should do. Instead, many just try to sound like Innocent – which isn’t the same thing at all.

“A bit of tone of voice”

That Innocent moment still echoes. You hear it when a client says, “We just need a bit of tone of voice.” This almost always means one thing: playful, charming, “human”, a sprinkle of magic dust that transforms the brand from dull, old corporate to fresh-faced, national treasure, at the tap of a Sharpie.

Requests for “distinctive tone of voice” are much the same. They start at the wrong end: the solution, not the problem. They work from the outside in, when branding only works from the inside out.

According to Dan Germain, Innocent’s original copywriter: “There was no strategy or theory behind it . . . we were just trying to make each other laugh”. Maybe it really was that naive. But the point is, they weren’t trying to be “different”. They were trying to be as Innocent as they could.

That’s where any voice should start, not with “let’s be distinctive” but with the truth of the brand. The voice’s job is to express that truth in a compelling way – not just turn cartwheels and handstands in an attempt to get noticed.

It’s not hard to see why people jump straight to “distinctive”. Distinctive assets get brands noticed and remembered. And an asset can’t be distinctive without first being unique.

That works fine for the shape of a Coke bottle or the Nike swoosh. But what do “unique words” look like? A tagline or name might be unique and trademarkable, but beyond that, we’re all basically stuck with the same words.

This often trips brands up – in their attempts to say fairly commonplace things in a “fresh” or distinctive way, they end up using complex, obscure, or bizarre language that just confuses instead of cutting through.

A distinctive voice can be super-powerful if your brand credibly supports a radical style. But don’t assume your voice has to be unlike any other. Work out what you’re all about, and who you’re talking to, and find a voice that fits.

The voice you find might sound like several others. And that’s okay. Digital bank Monzo has a famously strong voice. It also sounds pretty similar to some other brands, like health insurance provider Oscar.

Monzo and Oscar may not be hugely distinctive from each other, but both do a great job of being consistently recognizable as themselves. A Monzo email sounds like the Monzo app, which sounds like a Monzo ad. Likewise Oscar.

If your voice reflects the reality of your brand, that’s the best start. And if you use it well – consistently well – you’ll find it delivers far more meaning and value than the verbal equivalent of a funny nose and a fright wig.

SEE ALSO:Alexa — How Do I Create an Ownable Brand Voice?

The trouble is, doing an authentic voice consistently well is hard. Bloody hard.

Lloyds ran a campaign a while back, around the line, “For your next step”. The posters were striking – a couple in a cafe, with the line, “I don’t love you anymore.” Two men embracing: “He said yes.”

“If you’ve been grossly negligent, we will not refund any money taken from your account before you have told us your security details have been lost, stolen, or could be misused.”

By your side? Not so much.

Instantly, those posters looked like a mask – a trick. Oh, I see, you don’t really care, that was all just advertising guff. You’re the same old, cold bank you always were.

Of course, one bit of online small print isn’t enough to collapse a brand. But if a voice is breaking like this in one place, it will be in others. People will spot it. And we’re all much more ready to believe brands are duping us (especially banks) than that they’re kind, caring people who just made the odd slip.

At which point it stops mattering whether the Lloyds campaign expressed a deep truth or not. By neglecting to follow through on their voice, they created the space for cynicism.

Your brand is your brand to a consumer – wherever they meet it. They don’t say, “Oh, this probably wasn’t generated by marketing, let’s cut it some slack.” They just say, “Well, that’s horrible.”

This is what makes voice so hard. Because it has to connect the highest-profile comms with the simplest, most everyday ones. And so much of what a brand says isn’t written by writers – or even runs through the brand team. It’s service emails, T&C, website subsections, etc. (How deep those waters can run, and how dark.)

SEE ALSO:Writing Is Much Too Important to Be Left to Copywriters

The people writing these things need to understand the voice, believe in it, and feel confident using it. They need some practical training, a few simple tools, and clear guardrails, not masses of rules and abstract brand theory. They have other stuff to do.

They’ll never write finely honed brand copy. But they’ll use a voice that understands both the brand and its audience. A voice that doesn’t undermine what you’re doing on TV or billboards. A voice that’s recognizable, credible, clear, and helpful.

Which, given how few brands manage it, might turn out to be pretty distinctive after all.