On a blisteringly hot summer’s day, nothing could be more mouth-watering than that crisp mouthful of thirst-quenching delicious goodness found in a cool can in the fridge. Condensation droplets drip down the red, white and blue logo that has become forged into the subconscious of the public for several years since the recognisable symbol came into being in 1905.

Unlike its domineering competitor and icon of pop culture Coca-Cola, Pepsi has undergone several transformations in its branding, from vintage typography to Hollywood-style bling, from elaborate to minimalist. Originally under the name of Pepsi-Cola, the delicious drink followed the same kind of typography as Coca-Cola and continually reinvented itself, particularly during the Great Depression when it was marketing itself as an accessible, refreshing beverage that the hard-working American could afford. “Pepsi-Cola hits the spot / Twelve full ounces, that’s a lot / Twice as much for a nickel, too / Pepsi-Cola is the drink for you.” A popular feature on the radio, it ran with the principle that consumers could enjoy a drink equivalent to Coca-Cola and twice as much for the same price. It proved that even during a time of economic turmoil, by meeting the needs of the consumer at a reduced cost, it could boost profit.

Reaching out to the public would become a character trait of the company, whose progressively-minded President Walter Mack and Edward F.Boyd, an ingenious African American marketer, engineered one of the first advertising schemes to feature adverts with African Americans portrayed positively, recognising them as a valuable demographic. This would be the beginning of an innovative new marketing strategy which would become known as “niche marketing,” making Pepsi one of the most forward-thinking companies of its generation, as well as achieving a deep resonance with its audience by persevering with the campaign despite discrimination from racist extremist groups. Once again, its endeavour resulted in a positive sales increase.

Pepsi continued to “hit the spot” for several years and enjoyed an invigorating rebranding in the 70’s when Joan Crawford began to reignite its advertising ventures by making television appearances. Hubby and President Alfred M. Steele began to increase his presence in social events like pageants. Blind-testing competitions (which would become known as the “Pepsi Challenge”) against Coca-Cola and an exciting new logo (the iconic red, white and blue colour scheme streamlined with a circular shape) would garner attention and recapture imaginations worldwide. 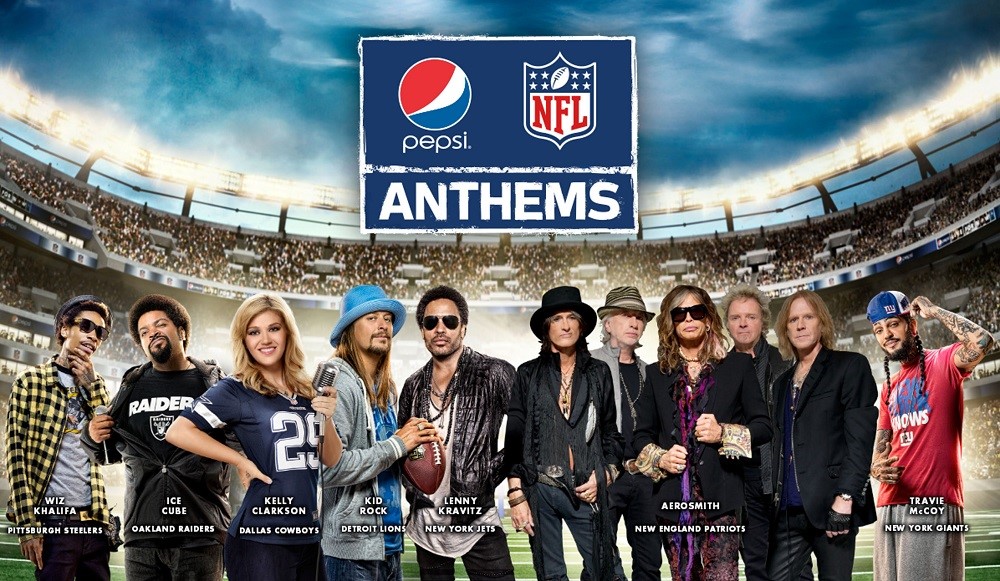 Pepsi continued to push itself as an “everyman’s brand” by sponsoring Major League Baseball, National Hockey League and National Football League sporting events. It would soon cater towards a younger generation by revitalising its logo several times over to implement the use of 3-dimensional graphics, which symbolically tied it to the refreshing carbonated water and intensified the vibrancy of the colours. The brand would surge into the world of Hollywood and pop culture by beginning a series of adverts helmed by the likes of Michael Jackson, Jackie Chan, Shakira, Britney Spears and Beyonce.

This wasn’t to isolate Pepsi as a brand exclusive to the rich and famous, but rather to suggest that the popular drink was representative of the emerging generation just as the iconic figures were stealing the stage. This indicated a shift from niche marketing to direct targeting of the mainstream. Once again, this resulted in a considerable sales boost, putting Pepsi’s profits up and instilling yet another refined and reinvigorated logo in the mass consumerism psyche.

Throughout these various brand changes, Pepsi’s definitive place in the hearts of people across the globe has remained steadfast. Countries like India, Saudi Arabia and the Dominican Republic are just a few; particularly in Canada, the drink is a beloved beverage for several provinces, including Quebec. The Quebecois culture embraced the drink with the bespoke slogan “Ici, c’est Pepsi,” in defiance of Coca-Cola’s claim to being the world’s favourite refreshment, followed by endorsements from French-Canadian personalities like Claude Meunier. In regards to the Pepsi vs Cola movement, being the underdog allowed Pepsi to avoid the heat of the fire commonly  directed at corporations like Coca-Cola and continue to boast mainstream presence, while having an edge in niche marketing, as well.

With the advent of drinks like Pepsi Max and earlier schemes such as ‘Pepsiman’ in Japan – an endeavour which worked with the country’s avid following of Sega and PlayStation beginning in the mid-90’s – Pepsi has continued to expand its audiences and market itself a product which is not only delicious but also energising, as well as low in carbs (in the case of Diet Pepsi). “Every Pepsi Refreshes the World” states the famous slogan of 2010. Its international presence is an angle which Pepsi has pursued as a partial departure from being the “all-American drink” – a heavily emphasized focus throughout the more domestic ideology pursued by Coca-Cola. Some critics may argue that Coca-Cola’s timelessness is reflected in its unchanged emblem and its distinctness, but the fact that Pepsi is willing to take a risk and continuously reinvent itself – thereby offering the same great product, but attuning it to modern trends – suggests a kind of adventurousness and commitment to consumers. And it must work, because to this day it continues to dominate the billboards and pop machines everywhere.