“We have arrived in an era where award-winning creativity typically brings little or no effective marketing advantage.”

– the stark revelation from the IPA’s new report The Crisis in Creative Effectiveness launched at Cannes Lions, 2019

The report, The Crisis in Creative Effectiveness, is a follow-up to the IPA’s 2016 publication, Selling Creativity Short, that warned of the dangers to creative effectiveness posed by short-termism in marketing, and covers hundreds of case studies that highlight a misunderstanding of how brands grow and prosper.

Download:Creativity for Brands and Lions – The Roundtable #37

The report reveals a continuing decline in the efficiency of creatively awarded campaigns. From 1996 to the 2008 financial meltdown and recession, creatively awarded campaigns were 12 times as efficient as non-awarded ones. But from 2008 to 2018, effectiveness fell to below four times. Today, advertising effectiveness continues to fall and creativity is almost certainly not delivering overall efficiency.

The report argues that this situation is entirely avoidable if one follows the lessons of best practices in creativity.

2) Lessons from creative best practice can reverse the damage

Marketers with long-term goals are drawn to brand-building, which is the main driver of long-term growth and involves the creation of emotional memory structures that prime consumers to choose the brand, something creativity is very good at. These memory structures take time to create and reinforce. You cannot build a brand overnight, but they are durable and their effects actually build over time. The priming effect also improves pricing power and over time has a strong impact on profitability. Therefore, over longer timeframes, creativity brings more value to advertising.

Marketers with short-term goals are drawn to sales activation tactics, which involve behavioral prompts to nudge consumers to want to buy now: promotional messages, reminders, seasonal or occasion-related prompts and ‘reasons why’, often based on minor new product news. These prompts are focused on getting an immediate behavioral response, so the creation of memory structures is not necessary. They work with what the consumer already believes, rather than trying to change the way they see the brand. They have little effect on long-term growth and pricing, so their impact on profitability is modest, but they can produce powerful short-term sales spikes.

Creativity brings little value to short-term sales activation, so the trend to short-termism likely reduces its value. When used together, brand-building and activation work in synergy, each enhancing the other. Brand communications create enduring memory structures that increase the base level of demand for the brand and reduce price sensitivity. Sales activation triggers these memories and converts them efficiently into immediate sales. The net result of using both tactics is a sustainable revenue stream with higher margins. 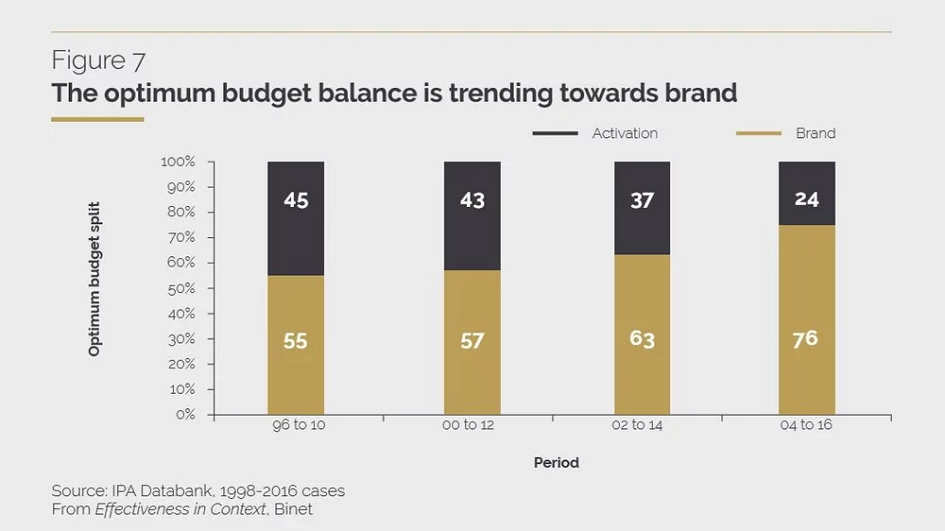 But the two need to be carried out in balance and the data shows a clear optimum ratio where effectiveness is greatest; over the last 20 years, this moving ‘sweet spot’ has averaged at 62% budget allocation to brand-building, but has been steadily shifting in favor of brand-building throughout.

The Report, a follow-up to the IPA’s 2016 report Selling Creativity Short, was based on IPA and Gunn report data to 2014, and now includes two new waves of case study data from 2016 and 2018. This provides 24 years of data covering almost 600 case studies, 121 of which won creative awards worldwide at the 46 creative shows monitored by the Gunn Report (now part of WARC Rankings). Efficiency is measured as % points of market share gain p.a. for every 10 % points of ESOV invested in the campaign.